It was going to be a sticky and rainy day, so we decided to go with friends to the NY transit museum in Brooklyn.
It was a short 2-3 train down there and we were welcomed by a nice farmers market just next to the station.
We headed for a quick brunch before going to the museum.
The museum was like a typical subway station. 1 slow attendant selling tickets , boiling hot and not super organized.
There was an activity workshop that my son attended , arts and crafts.
There were some busses that the kids could sit in and “Drive” and another level down was the most interesting thing of the museum- old subway cars.
That was neat to see.
For me , it was more of a ” Been there, done that, not going back” kind of a museum trip, bit atleast by going I got to form my own opinion. 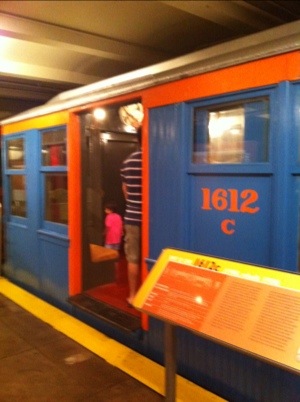 The morning at the firehouse that we did was more fun , I have to admit!!

Date night with hubby at Raouls. Review will be in later!