The morning started at 9 am with a site inspection of Villa Sant’Andrea. It was a private residence of a family and stayed for a century till 1950 till it was converted to a hotel. OE purchased it in 2010 and has been in renovation since. 60 rooms. 22 jr suites and suites total.

The hotel hadn’t opened for the season, so please excuse the pictures. So this is a great property for anyone who wants to be right on the beach, with access to Grand Hotel Timeo as well. The hotel operates a shuttle service between the 2 properties, so you can stay at either and enjoy the amenities of each one. You can also sign at each property and get billed at the end of your stay. This is a slightly younger hotel than its cousin property. I think an ideal stay would involve 3 nights at Tameo and 2 here.

Mount Etna, is an active stratovolcano on the east coast of Sicily, close to Messina and Catania. It lies above the convergent plate margin between the African Plate and the Eurasian Plate. It is the tallest active volcano in Europe, currently standing 3,329 m (10,922 ft) high, though this varies with summit eruptions. It is the highest mountain in Italy south of the Alps. Etna covers an area of 1,190 km2 (459 sq mi) with a basal circumference of 140 km. This makes it by far the largest of the three active volcanoes in Italy, being about two and a half times the height of the next largest, Mount Vesuvius. Only Mount Teide in Tenerife surpasses it in the whole of the European-North-African region.[2] In Greek Mythology, the deadly monster Typhon was trapped under this mountain by Zeus, the god of the sky, and the forges of Hephaestus were said to also be located underneath it.

Mount Etna is one of the most active volcanoes in the world and is in an almost constant state of activity. The fertile volcanic soils support extensive agriculture, with vineyards and orchards spread across the lower slopes of the mountain and the broad Plain of Catania to the south. Due to its history of recent activity and nearby population, Mount Etna has been designated a Decade Volcano by the United Nations.

We are going to the gate Zafferana, the main entrance of the park. We are going for olive oil and honey tasting first. (it was heavenly)

Sicily has 245 days of sunshine and temperatures in the winter are 60-63 degrees.
The snow that is on the mountain 7 months a year gets collected in an artificial lake ( largest in Europe).One of the largest eruptions was in 1928-29. The volcano has not killed a single person. It has 128 craters.

We went up to the crater, it was super windy and cold, it was icy and you had to hold onto someone, for you never know if you were going to get blown away! 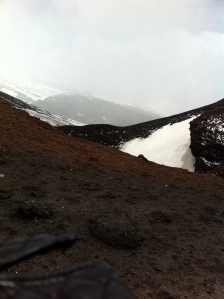 We then went to a vineyard Barone do Villagrande. It has been owned by the same family since 1747. We were in the town on Milo. The volcano, has made the soil super fertile, so its great for wines, olives, pistachios etc. Another interesting fact, is that the volcano, has yet to claim any lives! It flows so slowly, that before it gets too close the people have over 3 weeks to evacuate. 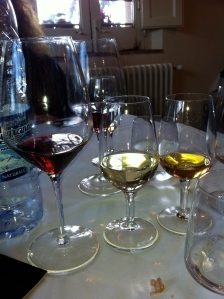 Taormina is a bull shaped city. Now we are at the acropolis. It’s a Greek -Roman theater. The original theater was different from what it is now. The Greek wanted to see the enemies from the height. There were chairs for the VIP’s. Then the Romans arrived and they wanted to do the gladiator fights here vs the tragedy plays that the Greeks were interested in.
The theater was enlarged-5,500 people can sit in here now. It can be evacuated in 10 minutes. They also built the structures in front of the theater. It used to be a huge 2 floor structure. It is now 1 structure. 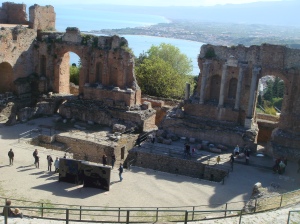 It used to be made in Marble and carerra. It was used as the quarry of the city. In 1861 after the unification the local community decided to restore it. Restoration was done in 1955.

Castel Mola is one of the most beautiful medieval villages in Italy. Some info on it , here 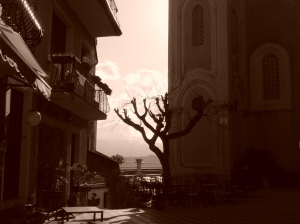 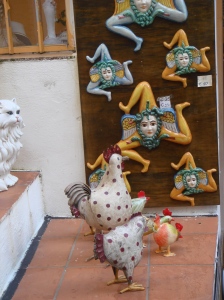 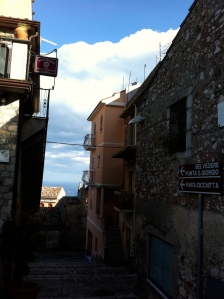 Was a Sicilian Feast! 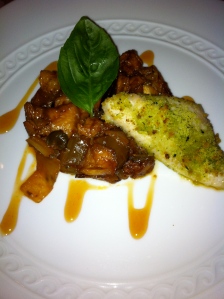 The course inbetween was a pasta course. In my excitement to eat the Sicilian pasta, I missed to take a picture! it was made with a duck sauce.. so , so good. I also seemed to have missed the next course- a fish course.. silly me! 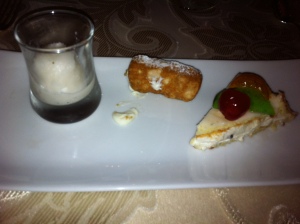 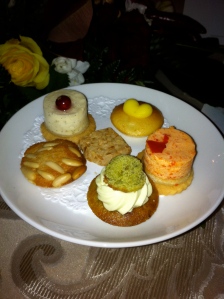 We had live Sicilian singers/ performers also entertain us. We all were laughing so hard , as they were just so comical. Its ironic that the Sicilian tradergy songs end up being so lively!

Another great evening. Service was remarkable. The waiters remembered what kind of water we preferred, who preferred what kinds of wine. A great hotel, fantastic staff and a remarkable experience.

A background in fashion, along with a full time job in it, I dabble in travel as much as I can! I enjoy food , wine, entertaining, reading and travel of course. Bit and blurbs about places I want to go and have been and whats going on in NY! View more posts